Now that you have your shiny new Evasion7 jailbreak running it's time to set up the environment for application testing!

(cross-posted with permission from CG from my work blog)

Since mobile substrate is not working yet we will focus on getting our idevice up and running as a functioning *nix environment and install some tools that don't require substrate.

First we need to get into our iDevices shell prompt. We will browse Cydia (that gets installed by default with the jailbreak) and then will install the openSSH package. 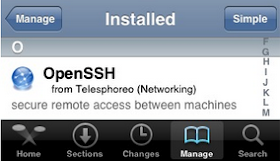 Once we get openSSH installed you can SSH into your device by finding its IP address in the Settings > Wireless Networks > Advanced ">" menu. Now SSH into port 22  on that IP using the username "root" and the password "alpine".

Once we have shell we can use APT to install most of the other packages we need. Also change the default root password to something else so people can't mess with your phone!

Arming your iDevice with *nix tools

To have a functioning *nix environment we need to install a ton of utilities that aren't usually installed as part of the default jailbreak or Bash shell. This includes utilities like strings, grep, awk, find, etc...

Some of the utility packages do not verbatim tell what's inside of them; things like big boss tools and Erika utilities.

These two in specific install strings and other binutils type tools. Several of them patched or modded to work on the iOS architecture (arm).

Packages (some of these will be pre-installed with the JB):


Take this list and dump it to a file (packages.txt) and run:

In addition to utilities that help make our iDevice a functioning *nix environment there are several tools that aid in connecting, controlling, reverse engineering, and monitoring iOS applications. Below is a list of those tools, a description, and their locations (some cut from my OWASP page):

This is just the basics.

Once you get all of these utilities and tools installed you're pretty much waiting on substrate to be working for iOS 7. After that's done you can install your favorite all encompassing or homegrown tool that uses substrate to do hooking such as Cycript, Inlyzer, SSLKillSwitch, Snoopit, IntroSpy, iAuditor, etc.

Then you just have to MitM the web traffic. There are plenty of guides on that around the net.

If you have other tools you use in your app assessment setup we'd love to hear about it. Feel free to leave suggestions in the comments.

Where has CG been?

I attempted to recruit some smart people to make some posts and they did so thanks to all the guest bloggers this year.

so what's been up?

well I've taken on two hobbies that don't directly tie into this blog. One, Christmas lights, like the obnoxious programmables RGB color ones. Facebook friends have been kept abreast of the situation.  Two, stock trading...which i found out a fair number of hackers are into...which is cool. The stock stuff came about from reading the Rich Dad Poor Dad book and trying to figure out a way not to have to work until i die. See that post for a tiny bit more explanation.

I've been told by a few people that readers would probably find the xmas light stuff interesting as it does involve cat-5 cables and packets over Ethernet frames. So I'll start knowledge dumping in Jan on that topic.

Shitty passwords are whats up this year (totally new issue right??!!!). I didn't go back and count but a large majority of the tests I performed or assisted with this year where there was some sort of single factor login portal (SSLVPN, Citrix, OWA, etc) fell over to one of the following: 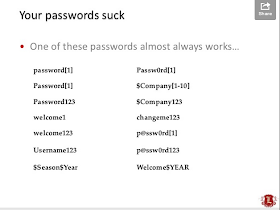 Its 2013 almost 2014 as I write this, its sad that we are still dealing with this like this a new or unsolvable problem.  Just reaffirms to me that we are failing as an industry if today we can break into some organization that spends any dollars on security with Password1. Its really no mystery why bad guys are beating the piss out of people.

Earlier this year a guy that does work on things in China gave a talk and said that the Chinese culture thing about security like this: (to paraphrase):

"if an organization doesnt protect against stealing it, they must not care about it"

Protecting your important **stuff** with Password1, or a web application where any web vulnerability scanner finds SQL... yeah its no surprise when someone steals your *whatever*.

Grumpiness aside, we did do some neat shit this year.  A pseudo highlight reel can be found in the string of talks that Chris Nickerson, Eric Smith,  and Mubix and I gave at Derbycon this year.


I also gave a talk at a credit union conference a few months ago where i tried to sum up how organizations are getting owned. TLDR; its all stuff we know about, but it takes work to fix, so not that many organizations do it.

I've been kind of a deadbeat on talking in 2013 but i have a few ideas on some talks for 2014, ideally blog posts either here or the Lares blog will help me work those ideas into posts and eventually into a slide deck(s).

So first of a few end of year posts...

I'd like to thank Joe McCray for recommending it to me. I wish i had read the book in my teens and/or my twenties. There are TONS of reviews on the book i'd encourage everyone remotely interested to read a mix of the 5 star and 1 star ones to get a feel.  I'll even drop the most important thing i got from the book here:

Assets make you money, liabilities cost you money. To build wealth you need to accumulate assets.

Pretty simple right?!  Unfortunately most of us (myself included) have been brought up to look at things like houses, cars, expensive things as assets because we can sell them if we need to for $$. However after being a former BMW owner and a current house owner i can attest that the mentioned items did not *make* me any money. In fact the house is a constant source of cash outflow. This is exactly what the book talks about.

Now to be fair, and if you read the reviews this will come across, there is A LOT of magic hand waving on how one starts buying assets instead of liabilities and growing wealth. The author uses real estate and mentions you can start a business or build wealth via stocks/trading as other ways to build wealth (assets). None of those in my opinion are quick, easy, or cheap to get started in and none of those come without a hefty education requirement in order not to lose your starting capital. Nevertheless, the value in the book comes from identifying the problem of how poor people view and interact with money and how rich people view and interact with money as well as giving a general road map on a new way to think about building wealth.