The first post talks about executing shellcode and gives the calc.exe example. These examples work on x64 and x86. yay! 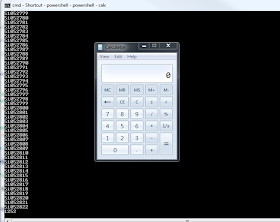 The second post talks about doing something more than calc.exe...getting shell whooo hooooo

You can review the code but it only shows a x86/32bit shellcode. This will fail miserably on x64.

I was initially thought it would be an easy fix, just grab an x64 payload from MSF. Problem is there are no x64 http/https payloads...

CG was a sad panda.

This left me with two options:

Suck it up and use an existing x64 payload (like rev_tcp) or just pop calc.exe to prove how awesome i am during pentests

So googling turned up a way to tell PowerShell to use the x86 version even on x64. The solution i used was here: http://www.viveksharma.com/TECHLOG/archive/2008/12/03/running-scripts-that-only-work-under-32bit-cleanly-in-64bit.aspx

You will need to set the execution policy for  v1.0 powershell, or possibly try a bypass technique.

I ended up adding this to Nicolas' code before it started doing its thing (line 24). It detects if its not x86 and just runs the shellcode with the x86 PowerShell.  You'll have to set the execution policy for it first.

Remember that you have to migrate out of the PowerShell process.
Much like the office macro and shellcode exec, if user closes office, or you close exit powershell process shell goes bye-bye.