Hey all, as promised I have something coded up and it works well enough to release. Still a lot of functionality to add so you can give your customers something nice to look at it and fairly dummy proof.

DirSnatch, the script I wrote with @k3r0s1n3 was really something my customers liked (due to expedited testing times) but was basically really ugly. It was ugly because it was a dreaded console app :(

Okay, so using the ruby gems 'ocra' and 'wxruby' k3r0s1n3 and I were able to create a windows based stand-alone executable in GUI form.

Again, there is a TON to add to this tool and make it just cooler to work with.

Also, we are working on making Qwickr (formerly qwick_request) GUI.

Qwickr currently allows you to request URLs in a text file (such as the output from DirSnatch) in a threaded fashion thru the intercepting proxy of your choice. This is also helpful if you intercepting proxy doesn't allow you to save the URLs you've spidered. This creates a site map in no time.

The console version of Qwickr is finished but we don't want to release until its functioning as a GUI app. So be on the look out for that.

Here is a screen shot of DirSnatch_v1.1 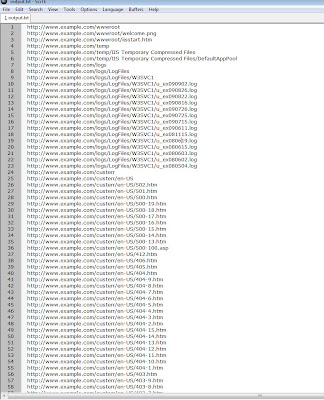 The file annotated GUI_DirSnatch.rb works on linux but you must perform a 'gem install wxruby'