Zone Transfers Still Exist! -- No Really They Do!

So while helping a buddy out with an audit we came across a mis-configured DNS server that allows zone transfers (I know, we couldn't believe it either). Zone Transfers are one of those things that you read about in security books and even teach but you never think they work (like the ping of death), not quite like seeing a unicorn but kinda like finding a four leaf clover.

Here is some background information on Zone Transfers.

"The data contained in an entire DNS zone may be sensitive in nature. Individually, DNS records are not sensitive, but if a malicious entity obtains a copy of the entire DNS zone for a domain, they may have a complete listing of all hosts in that domain"

This is essentially what we were able to pull down from this DNS server, but not just information from its domain but many other domains because it was authoritative for a whole bunch of domains. 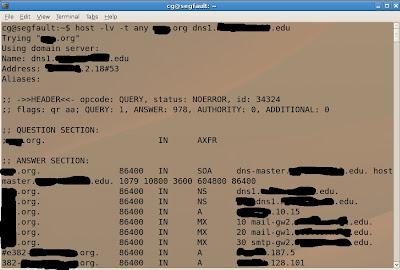 Find out the name servers for a zone:

Request all records for a zone from an authoritative server:

@server is the misconfigured DNS server, domain is the domain you are trying to get information on.

Use host to find all the host records for a zone:

Use host to request all the records for a zone:

this is what you usually see:

The (sanitized) screenshots above is what we got, about 3k internal IPs and hostnames :-)

Of course, the easiest way to test this is to use dnswalk that will do the requests for you.